In 2016, the City of Sault Ste. Marie commissioned an Environmental Assessment to address flooding issues affecting public and private lands and infrastructure in the McNabb Street and Pim Street areas.

TULLOCH’s hydrological and hydraulic assessment of drainage systems identified the primary causes of flooding: the conveyance capacity of the minor piped storm sewer network and the lack of an overland flow route. Complicating the problem was that much of the City’s existing storm sewer infrastructure was placed very deep (~6-9m) on private property and the past topography of the area had undergone significant terraforming in the 1960’s, which filled a large existing ravine.

As common with many municipalities, development and urban sprawl has put pressure on existing downstream drainage systems. The subject sewer network drains much of the north central portion of the City of Sault Ste. Marie through the old downtown core. During the course of exploring options associated with increasing conveyance capacity within the storm sewer system, it was quickly identified that any increase in flows to the downtown core would simply result in moving the flooding problems from upstream to the downstream downtown core of the City.

The Class EA explored various options of reducing and managing runoff and/or flow rates from the watershed, both upstream and downstream of the proposed storm sewer replacement. The preferred alternative capitalized on the existing natural topography of the area by utilizing the existing ravine south of Bruce Street between Pim Street and Gladstone Avenue as a stormwater management pond. The reconstructed Gladstone Avenue roadway provided a man-made embankment/berm splitting the natural ravine in two. 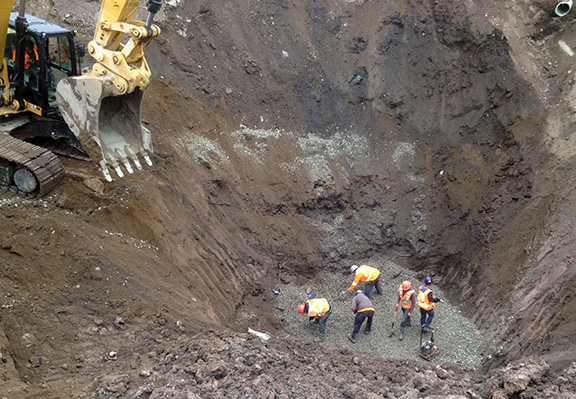 The ravine operates as a dry detention pond for the management of storm water release rates to the downstream receiving sewer system. The project received approval to proceed to construction from Sault Ste. Marie Pim and McNabb Street Drainage Improvements Region Conservation Authority in the spring of 2017 and was successfully completed by fall of 2018. TULLOCH’s complete scope of services for the project included:

The project replaced 760 m of deteriorated and under capacity storm sewer that discharges to an existing natural ravine and connects to a new sewer in Poplar Park. An existing ravine encompassing an area of approximately 23 hectares was converted to function as a dry detention pond. The ravine accepts stormwater from a 188.2 hectare drainage area. Peak release rates are controlled to downstream sewer capacities and/or existing conditions to mitigate the risks of downstream flooding.

TULLOCH is very proud to have successfully completed this project on behalf of the City of Sault Ste. Marie. The cost-effective practical solution will service the community well for decades to come.